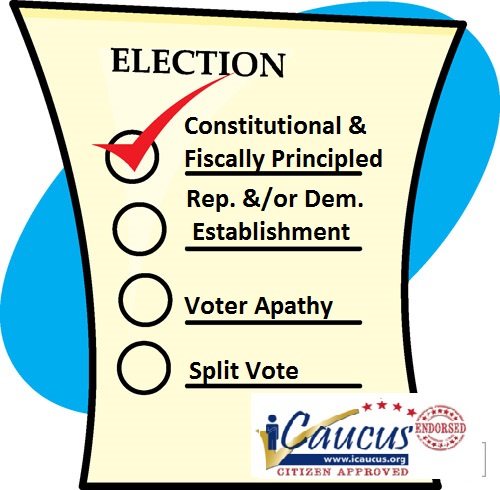 How many times must we see the same results before we wake up as Americans? Losing good, principled candidates in the primaries will continue to occur until ALL those interested in freedom, liberty, and limited government stand together against the political class, this includes the "liberty and conservative groups"  In this article we will once again bring out points we should have learned from in prior election years as they apply to some of the early primaries, but also those upcoming primaries.  These are a lot of the reasons we end up having to vote for the "lesser of two evils" in the general elections.

What are the reasons for voter apathy? There are several reasons, but let us start with the most common reason we all hear, "Why should I vote when it doesn't count and nothing changes"?  The simple answer is that if we don't vote nothing is going to change or things are going to get worse.  That is exactly how we have gotten to where we are.  Apathy meant that if we voted at all, we only listened to talking points and didn't really know who we were voting for. Apathy meant we took a political party and our media at their word and trusted they had completed a thorough vetting of the candidates and were speaking the truth.  Apathy meant that after the elections were over we weren't watching to ensure they were staying within boundaries of our U.S. Constitution, or sound fiscal policy, or even that they were trying to find ways to limit government intrusion.  Therefore, none of these things were accomplished by our representatives.

Each and every one of these things is an untruth. Those things only occur when we all cannot put aside a few differences or ego and get behind one solid principled candidate.

Voters with No Skin in the Game

Although we hate to point this out, this is becoming a lot of the voters who belong to liberty groups and organizations. "Prove to me you are going to win or can win" seems to be the way most are thinking now.  These voters will also grab on to anyone of principles or appears to be for the moment.  How do candidates get into office without at least some resources? How do things change without the help of those who are seeking a return to our freedom and liberty?  The answer to both questions is that they don't.  If you aren't willing to put in the work to KNOW your candidates or to get them elected, you will get exactly what you are asking for.....nothing.  Even the organizations you claim to support need time, effort, and yes...money.  None of the tools are free ie: websites, conferencing, meetings, etc. Your efforts can accomplish goals, but your lack of effort won't accomplish anything except your ability to say you belong to an organization. Each person can do something, even if it's just forwarding emails to others, applying yourself to social media, or talking to people in a grocery store line.

Failing To Get Out the Vote

Our country has become a place we never expected to see. One where people are afraid to talk to anyone else, especially when it comes to politics. However, if we all are going to accomplish the goals we have set forth, we are going to have to leave our comfort zones. For the primary elections, this means you are going to have to talk to all people in the political party you belong to and sometimes actually oppose what they are saying. It also requires registering people to vote, even if they register to the opposing party.  We know that is hard for some to do, but just think about like minded people registering to the opposing party. What would that accomplish? Both parties have the same issues. Both parties are basically choosing your general election candidate (more on this later) in the primary election. Both parties have told their voters they don't care about them. Almost ALL representatives from all levels of government (both parties) have shown the American people they will do what they want, even when WE don't want them to or when it harms us and our ability to make decisions for our families or even find jobs.  We MUST do better when it comes to getting people out to vote!!

This seems to be the newest tool of the establishment. We saw this in several states, including VA, NC, OH. We are seeing it in many more. Any activist or liberty group leader needs to be paying attention during the election cycle. Use some method to Vet all candidates, look into their funding and campaign staff. Who is behind the scenes helping them? What are their associations? Let's show one example from NC in the Senate races. Both the Republican and Democrat primaries had more than two candidates. Although in the Democrat primary it wouldn't have mattered, the Republican primary had the citizen endorsed candidate (Greg Brannon) and the most other candidates in the race.  Here is where we get into numbers: 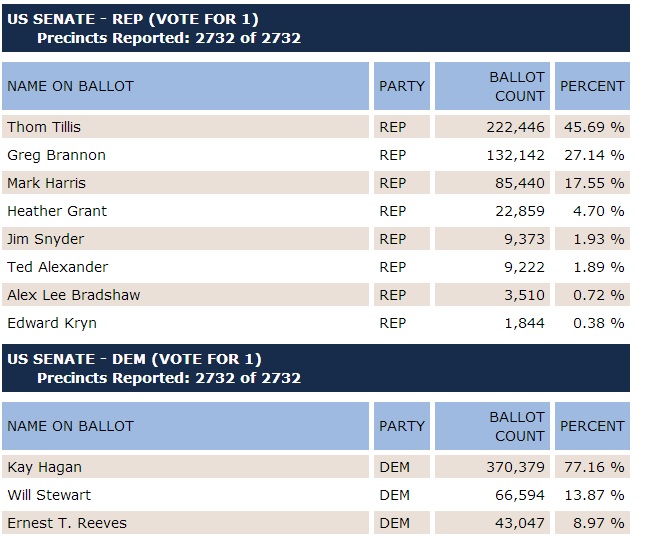 Thom Tillis was the establishment pick and was even working with Karl Rove.  Mark Harris was encouraged to run by the former Chairman of the North Carolina State GOP who is known for his Progressive tendencies. Moreover, that same person was at minimum advising the campaign, if not actually campaign staff.  All the others we assume were running for their own reasons and I'm sure it was just because they are as fed up with Washington DC as the rest of us. For this article however, we will only focus on Mark Harris and Heather Grant as those two and their supporters are who we are familiar with.  Those voting for the third and fourth place candidate are conservative voters who more than likely are also Constitution and/or fiscally responsible based on information obtained by our teams on the ground in NC.  If they had not stayed in the race and put support behind the other candidate with their values, Greg Brannon would have won the primary. Instead, NC will be faced with choosing one Progressive over another.

Results 2 - Boots on the Ground for Brannon

In this next illustration, you can see what difference citizens can make when they are more solidly behind one candidate.  In this county, Brannon actually won the primary because the citizens were involved.  They were everywhere within the county. Every event, every door, every phone number, and neighbors and friends. Again, the split would have been even further, had those other two candidates not stayed in the race.  This is why citizens must be engaged and empowered in the election cycle. 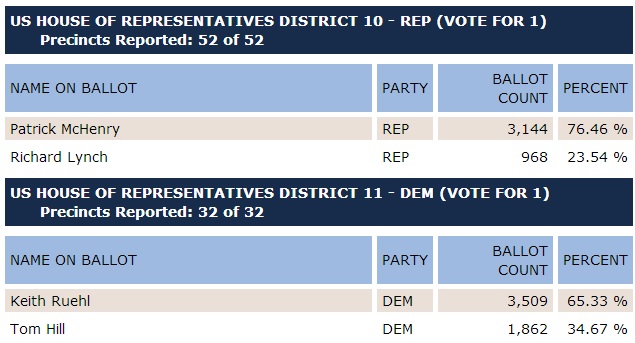 Results 3 - The Picture gets Worse

We put these results out due to the number of voters.  What was amazing to us is the numbers of voters actually dropped when it came to the House of Representatives and State or local seats. We had to ask ourselves, why would you be in a voting booth, vote for the U.S. Senate, then not vote on any other race? Again, it appears to be voter apathy and/or indoctrination.  Let us make this very clear for the readers....EVERY SEAT AT EVERY LEVEL OF GOVERNMENT IS VITAL FOR THE SAKE OF OUR NATION.

Once the establishment of either party knows they are effectively splitting the efforts in a district, they begin using establishment based PAC's and political consultants to bring in money and change messaging to appear to be more focused on freedom and liberty.  Sadly, to the uninformed, misinformed, or those who have been indoctrinated by the political parties they buy into those untrue talking points even when the voting records show exactly who they are.  For the political parties, this is a winning strategy they can repeat every election cycle until citizens finally realize the power of standing together through the entire election cycle.

Whether through iCaucus or not, all organizations and citizens need to begin to work toward the same goals.  We need to stop allowing the political class to divide us by any means they have at our disposal.  Every one must stand without FEAR and communicate with some who are outside their comfort zones. Without this happening, elections will continue to be lost and with it our hope for a bright future. What will you do?

Right on!  We have only ourselves to blame for the decline of our nation.  Do you want to continue to vote for the flip side of the same coin or change the direction of our nation?  We are circling the drain.  We leave nothing to posterity but debt, 92,594,000 Americans not in the labor force (all all time record), no jobs, strangling govt regulations, socialized medicine, and the list goes on.  Both parties are responsible.  When will YOU get off your butt and cease listening to the party hacks, toeing the party line, and get involved in the PRIMARY and back ONE candidate – vetted – grounded philosophically in our founding documents,  and can defend the principles upon which this nation was built upon.  Buncombe, Haywood and Polk did!  What will you do going forward?  (J. Bilello)